Our signmaker observed that if a bill is a “written or printed public notice or announcement,” then a “Post No Bills” sign is itself a bill; as such, it’s an example of what not to post.

Anyone know an interest form that might appreciate this opportunity? 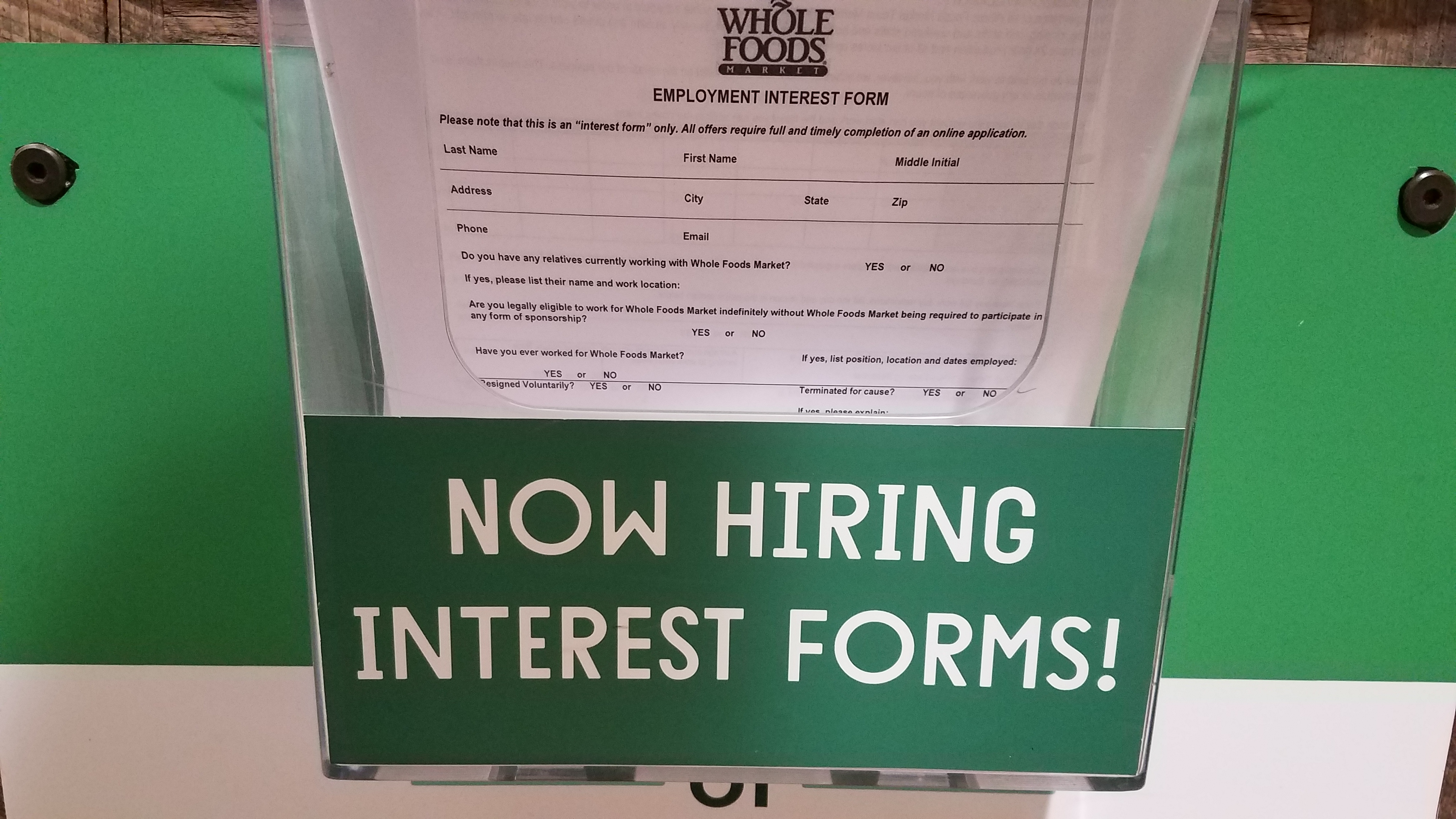 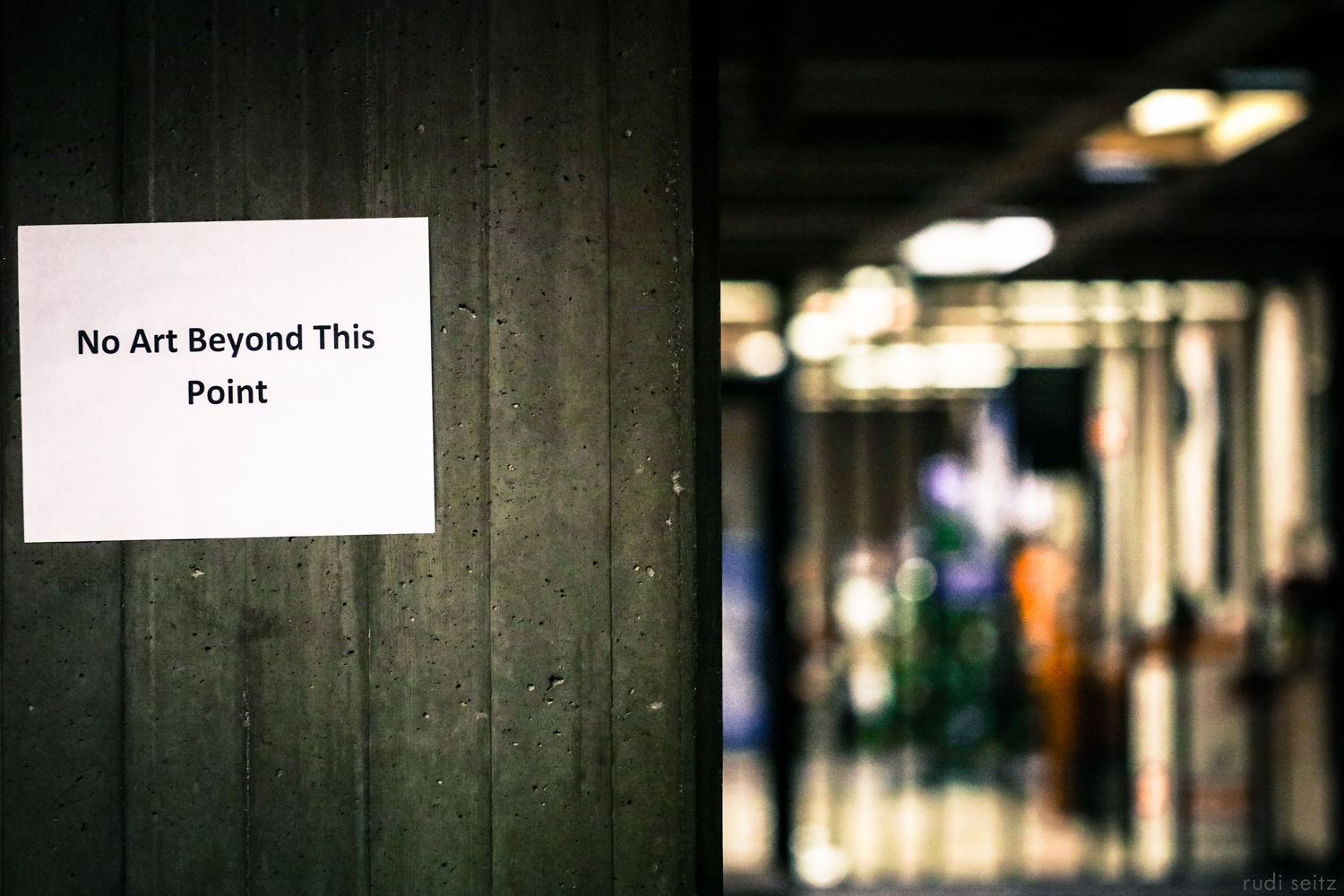 I saw this sign at Boston City Hall on November 20, 2018 at the edge of an exhibit of posters made by MassArt students to raise awareness about climate change. Many of the posters in the exhibit were ominous, like one poster that showed a human whose neck had been caught in plastic six pack rings as happens to turtles other animals when they encounter our dangerous waste. When I saw a sign with the words “No Art Beyond This Point,” I immediately interpreted it as if it were itself a poster in the exhibit, and I apprehended a message to the effect that “If climate change continues unabated, we will reach a point of chaos beyond which it will be impossible to make art.” Given this interpretation, the “No Art Beyond This Point” sign struck me as perhaps the most ominous of all the items in the exhibit. Of course, the sign was most likely posted by the exhibit organizer to let viewers know that they had reached the end of the exhibit and there were no more posters to be seen down the hall. Or perhaps it had been placed there by City Hall staff to the let the exhibit organizers know that they should not hang posters beyond that specific point. One thing that struck me as odd about the wording is that there seems to be an unofficial convention that signs of the form “No X beyond this point” mean that the thing in question, X, is not to be taken or done beyond a specific point. For example, “No alcohol beyond this point” means that you can’t carry your drink any further. “No fishing beyond this point” means that you can’t fish past where you are now. Considered out of context then, “No art beyond this point” should mean that you can’t carry your art any further? You can’t leave with art? You can’t make art outside these confines? Speaking of conventions and common assumptions, there seems to be a prevailing idea that photographs are “artistic” when they contain lots of bokeh. So, I thought it might be provocative to take a photograph showing the “No Art Beyond This Point” sign along with the nether region that is supposed to be devoid of art, with the quirk that this nether region appears “bokehfied” and, maybe, full of the intrigue that bokeh is supposed to supply. 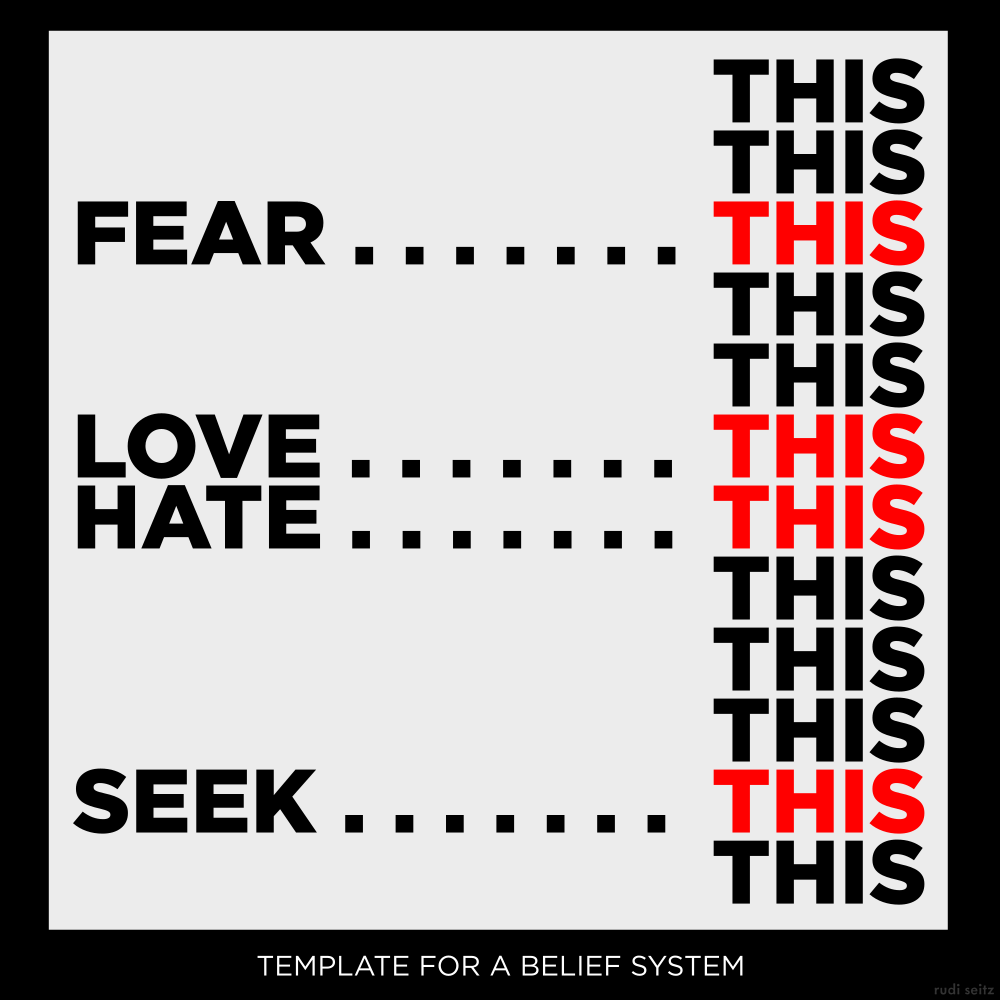 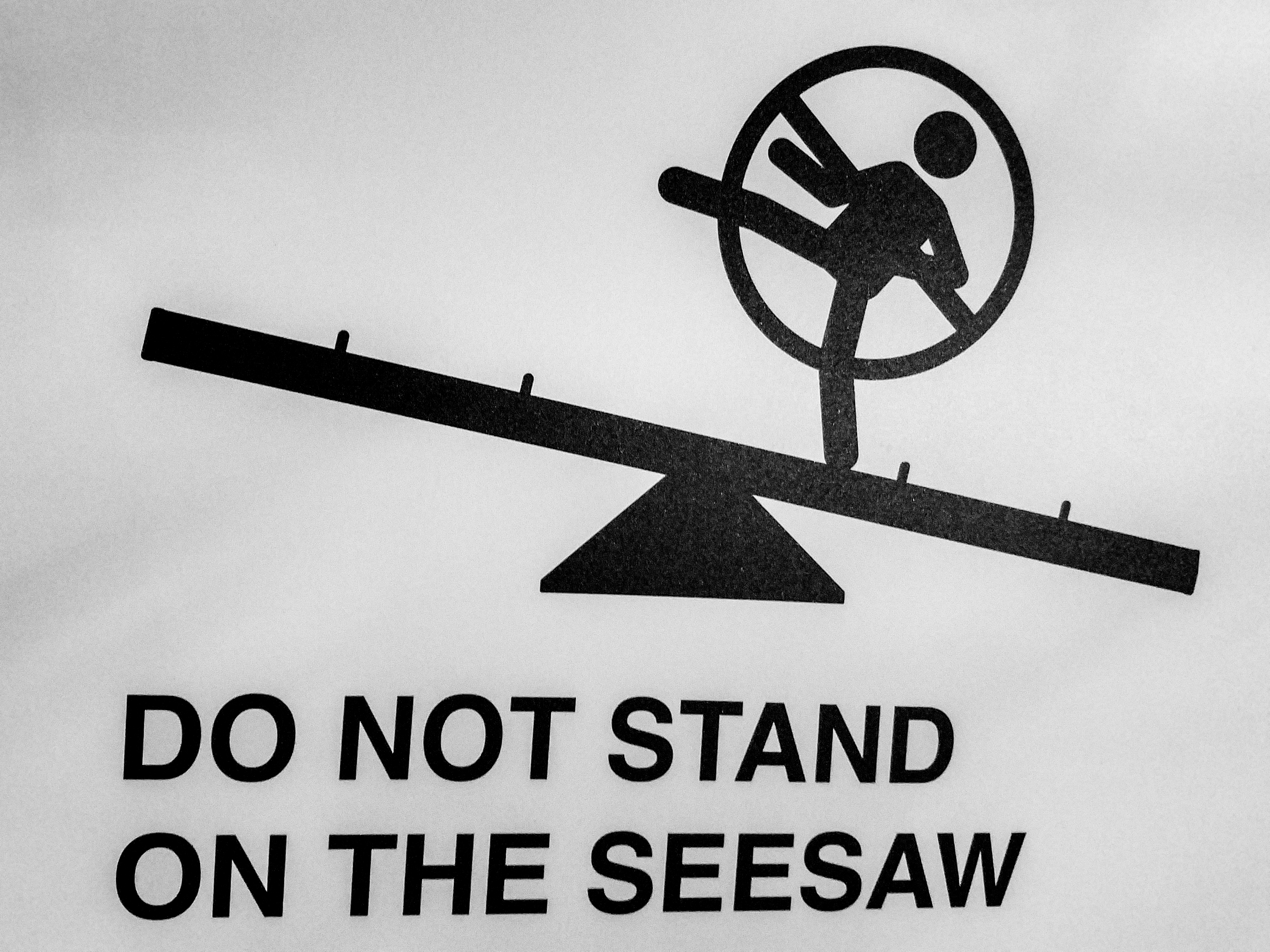 When I posted this photo on Facebook, a couple of friends remarked in the most dutifully matter-of-fact way that someone must have gotten hurt on the seesaw and that’s why this sign must have been made. OK, OK, I get that it’s dangerous to stand on a seesaw. And if this sign indeed prevents some seesaw accidents, then I guess it’s a good sign. But whatever utility inheres in this sign is not a reason for me not to be highly amused by its design. I like how the circle-with-a-slash icon looks like some kind of hula-hoop, placed as it is around the stick figure’s torso only, not even covering the legs which are doing the standing which is what the sign is saying not do to.

I noticed this sign on the Orange Line last Tuesday: 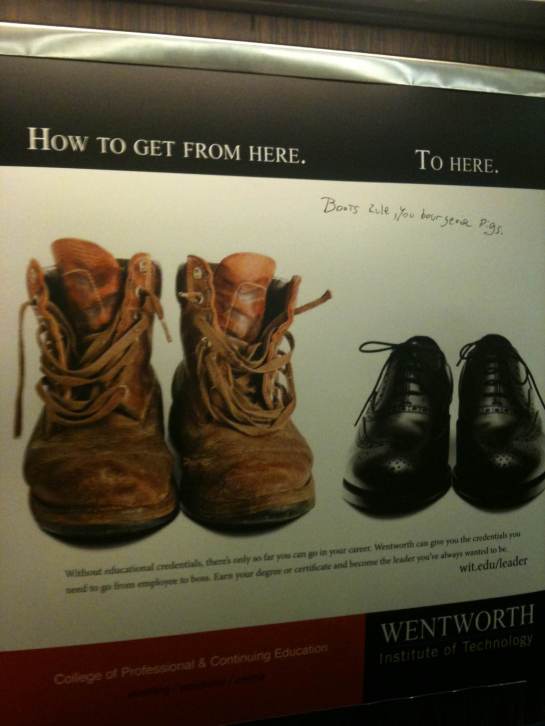 The heading reads: “HOW TO GET FROM HERE.  TO HERE.”  On the left, there’s a well-worn pair of work boots; on the right, a shiny new pair of dress shoes.

The caption says: “Without educational credentials, there’s only so far you can go in your career.  Wentworth can give you the credentials you need to go from employee to boss.  Earn your degree or certificate and become the leader you’ve always wanted to be.”

On top right of the sign someone wrote: “Boots rule, you bourgeois pigs.”

When I saw the boots I thought “hard work; action; building things; getting things done.”  When I saw the dress shoes pitted against the boots, I thought “corporate office; oceans of email; long meetings; windows that don’t open.”

I assume the creators of the ad were counting on viewers to interpret the symbols differently: boots are supposed to represent a dead-end job, the drudgery of manual labor, a low salary, a lack of recognition.  Dress shoes, I suppose, are meant to indicate opportunity, sophistication, power, an advancing career.  Boots mean “worker,” and dress shoes mean “boss.”

By that reading, the ad insinuates a repugnant idea: that trade work is inferior to office work and that anyone wearing boots to their job should aspire to someday have the privilege of wearing dress shoes, a privilege so enviable that they might want to consider becoming indebted to Wentworth to obtain it.

Education should be a pathway to having greater choice and control in one’s work and life — I’ve experienced those benefits, and I think they should be available to everyone.  But dress shoes represent a very narrow-minded idea of success.  If Wentworth’s marketing department had used visual symbolism focused on choice and empowerment — if they had selected imagery that contrasts professional immobility with the increasing opportunity and self-directedness that can come with education, this might have been a decent ad.  Instead, Wentworth presents a view of education as what?  A credential shop?  A class elevator?  A place to change one’s fashion? I was glad to see that this sign received a bit of the graffiti it asks for. 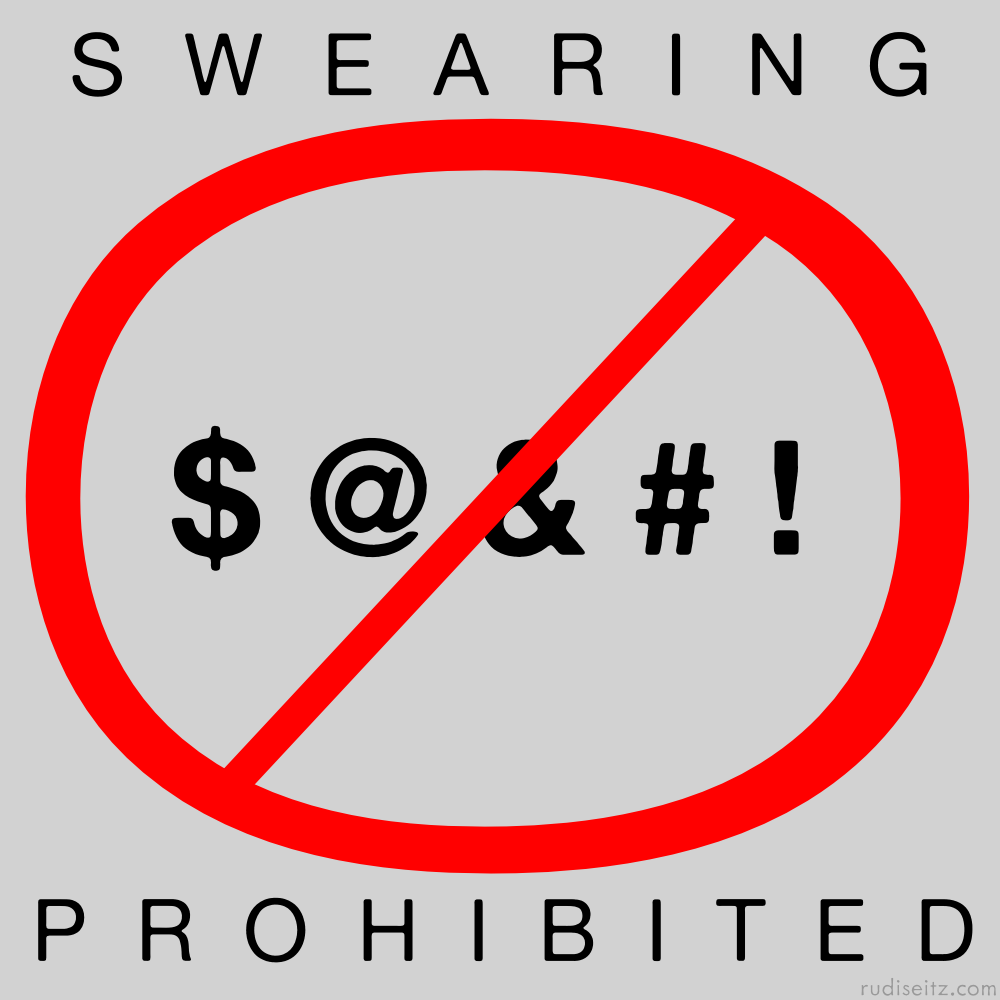 I created this sign to remind everyone that swearing is prohibited on the Internet.

Actually, I created it as an experiment in communicating with visual and textual symbols. There are three elements at play here: a red circle, the words “SWEARING PROHIBITED,” and a grawlix (“$@&#!”). When you put those elements together, what message do they make?

Last night, I asked a couple of friends at Venture Cafe. Most people were willing to take this sign at face value.  Whether or not they agreed with the idea of prohibiting swearing, they felt the sign did convey a sincere message.  (In fact, a similar sign containing a grawlix in red circle has appeared in Virginia Beach as part of an anti-profanity campaign.)

For me, the sign is hard to look at without laughing because I find it fundamentally hypocritical: it swears!

Where do we draw the line between a symbol and the thing it represents? Specifically, do we take “$@&#!” as mere notation for the idea of a swear, or does it make us think and feel as though we’ve just heard someone actually swear? (This question brings to mind a joke by Louis C.K. where he says that the expression “The ‘n’ word” offends him because whenever someone uses that censored phrase, they are forcing him to say the avoided word — [BLEEP] — in his own mind.)

Now for me, “$@&#!” is so strongly associated with swearing that when I view it in this sign, I become witness to a curse.  And then I begin to wonder who’s cursing, and how the curse might relate to the rest of the sign.  Is someone cursing because they don’t like the prohibition against swearing?  Or do they really, really agree with it?

Even if you don’t experience the grawlix as an actual curse, you might notice a mismatch between levels of formality in this sign. SWEARING PROHIBITED sets a tone of severe formality, and yet “$@&#!” is the kind of icon we might see in a comic book. The sign has the same contradiction as a statement like: DO NOT SPEAK COLLOQUIALLY OK?

As I worked on the sign, I couldn’t resist the temptation to make an intensified version, which you’ll see below. For a while I thought that what I had come up with was so contradictory that no viewer could take it seriously. And yet, as I stared at this second version, my perceptions shifted. Where it had seemed that the swear words were subverting the circle by shining right through its porous front, now it seemed that those bold and brazen words were still captured inside the circle and still negated by it. Who wins, the circle or the swears?  I don’t know: either it’s the most obscene sign I have ever seen, or the most uptight one.

As I was finishing the sign, I had a software crash and lost a lot of unsaved work. When that happened, I assure you, gentle reader, I did not say any of the terms herein depicted: 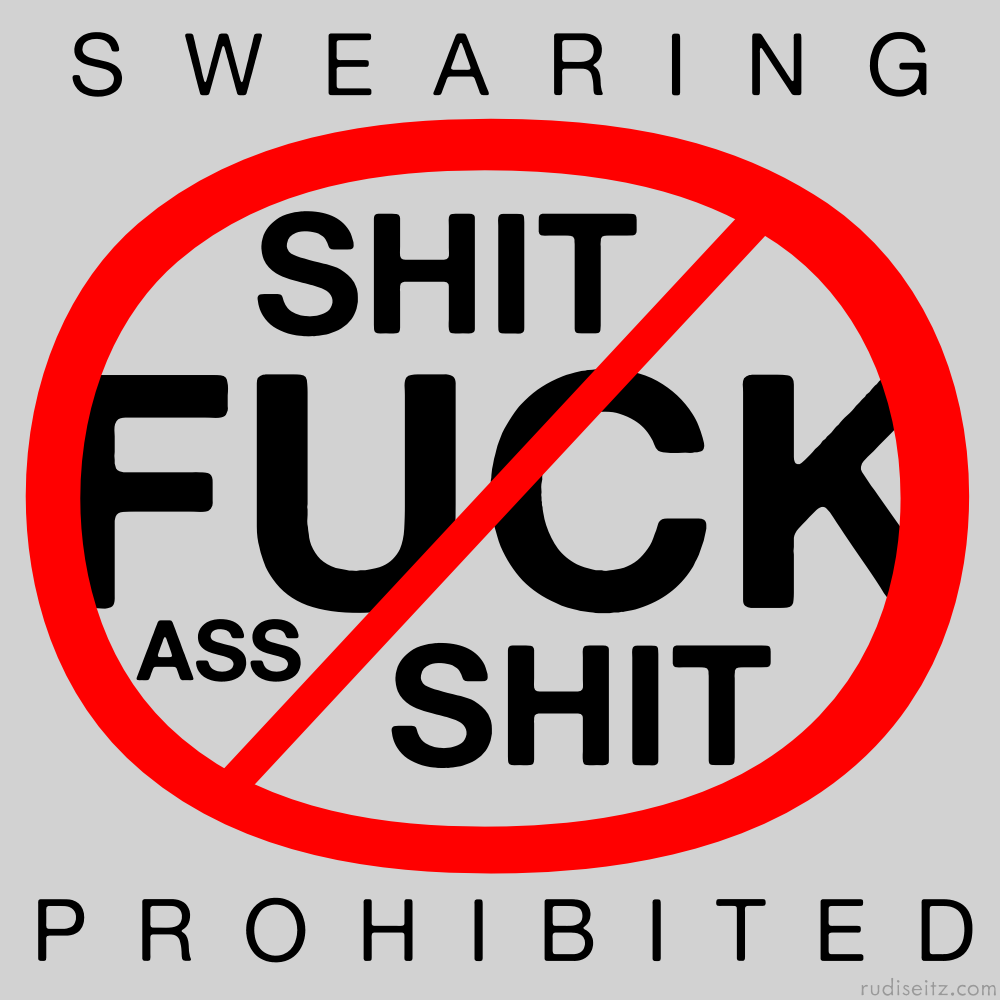