Considering that today is a holiday that has some association with spiders, I thought I would share some photos of a Cross Orbweaver that I took in September 2017. I found the spider one day in my garden, and it stayed there for about a week, building and rebuilding its web. I developed an obsession with photographing it. By the time it left, I had taken around 1240 shots and had begun to refer to the creature as “my spider.” I’ve been struggling to edit the collection since then, but with the impetus of Halloween being today, I thought I’d present an abbreviated version.

This first shot shows the spider with its legs outstretched, as if in shock, desperately grasping for something that’s no longer there:

I just said the spider looks like it was “desperately grasping for something that’s no longer there.” Indeed, that’s what it was doing, and I’m to blame! You see, as I photographed the spider over many hours, I felt so much gratitude for the fascination it was affording me that I made a resolution that I would never do anything to disturb it, even if some disturbance would give rise to better photographs. My one manipulation of the environment was to mount a piece of black paperboard in the background to make the web easier to see. At one point, when I was probably five-hundred shots already into this photographic journey, I inadvertently violated my resolution. As I was adjusting the paperboard, I accidentally touched and jostled the web, causing the spider’s meal — a meticulously encased moth — to fall tragically to the ground. This photo shows the spider reaching for the meal that had just dropped from its preprandial embrace. I was surprised at how long the spider held this pose (maybe five seconds?) as if it simply couldn’t accept that moth was really gone.

Eventually the spider retracted its legs in a gesture filled with more pathos and desperation than I am used to seeing from an arachnid:

The spider seemed to be feeling pretty bad, and so was I, for having put it in this state. Luckily I hadn’t entirely ruined the spider’s day. While I had caused it to lose one of its meals, there was another partially encased moth waiting elsewhere in the web. The spider eventually emerged from its curled-up lamentation and began heading towards the second moth as I watched:

When the spider found the second moth, it decided that this morsel could not be left where it was (why?), so it began carting the thing to the other end of the web. Here you can see the spider pulling and swinging the second moth around with only two threads supporting the precious cargo:

Now the spider begins to approach the precariously suspended moth as if ready to eat: 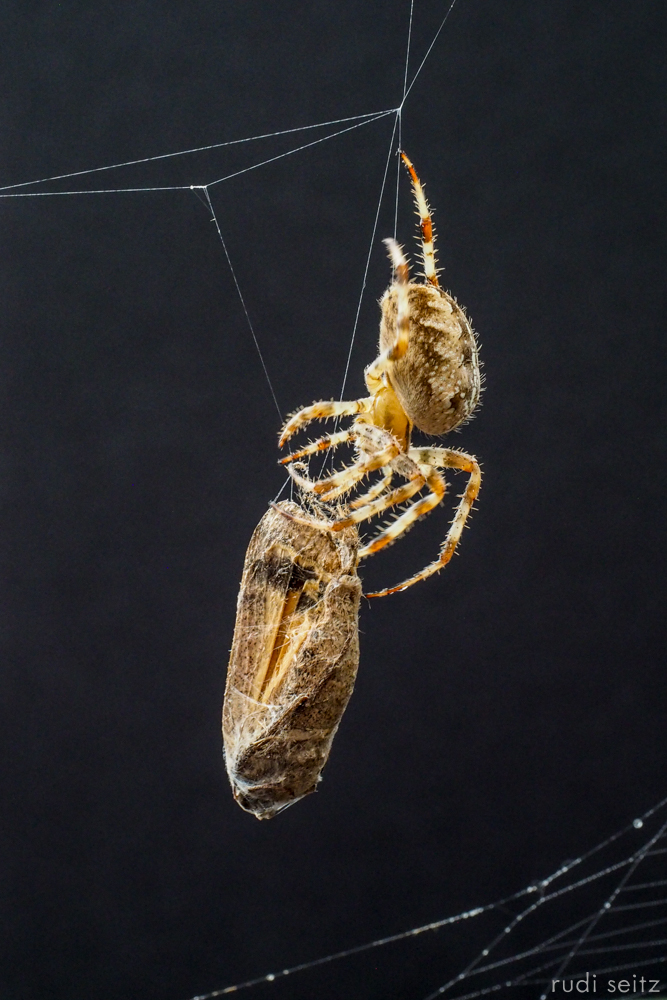 But instead of commencing its feast, the spider decides that the moth must first be wrapped in more layers of silk (again, why?). Here you can see the spider secreting a “blanket” of silk from its rear end and wrapping it around the moth:

After further encasing the moth, the spider again decides that the moth cannot be left where it is (why?). For some reason, another precarious transfer is undertaken. The moth, now hanging from just one thread, seems to be in danger of plunging to the ground at any moment:

But spider’s execution is virtuosic, the silk is remarkably strong, the moth never falls, and finally in this third position, the spider begins to eat: 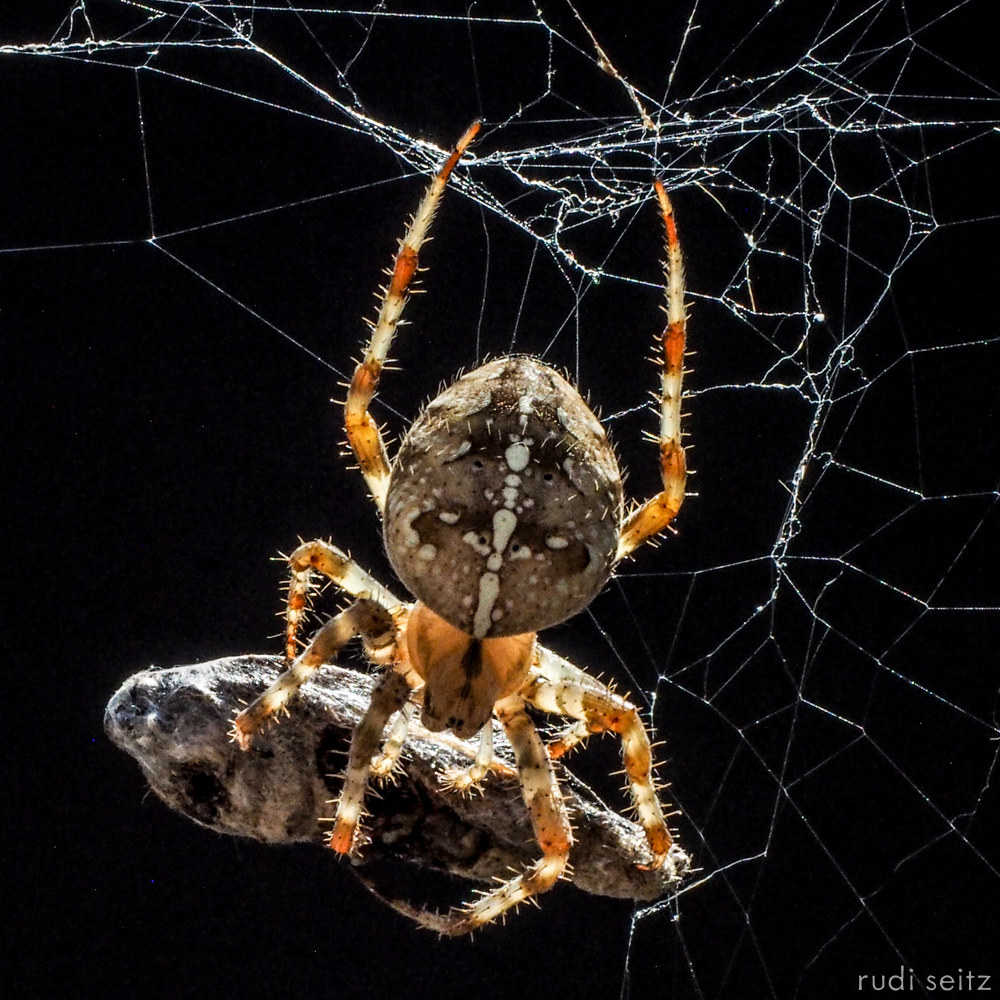 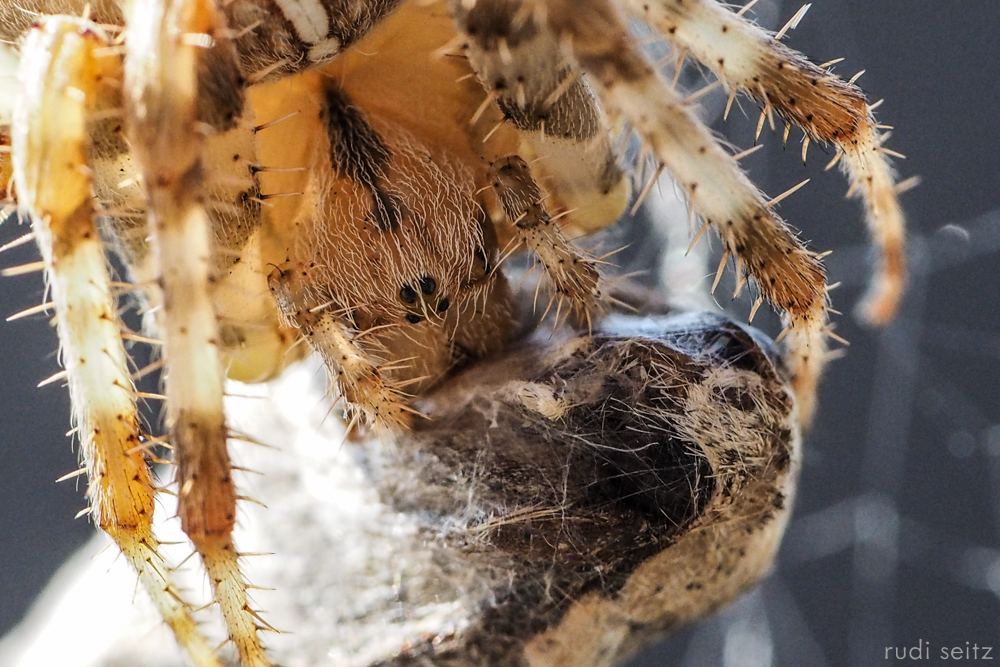 That’s the end of our little story of the spider losing its meal and finding another, but I do have a few more images to share. I should mention I don’t really know anything about spiders. I just love watching them. I’ve never studied entomology. But by taking photographs and looking at the photographs very closely, I’ve learned some interesting things on my own. For example, spiders (some spider) have claws. That’s how they’re able to grasp the strands of the web. Look at this:

And as we saw above, spiders can “spray” a nebulous blanket of silk from their rear ends (technically, from their spinerrets) when encasing their prey. But they can also secrete a single, well-defined thread of silk. Here’s a nighttime shot of the spider pulling thread to use in rebuilding its web:

Haven’t seen enough yet? Here’s what the spider’s underside looks like: 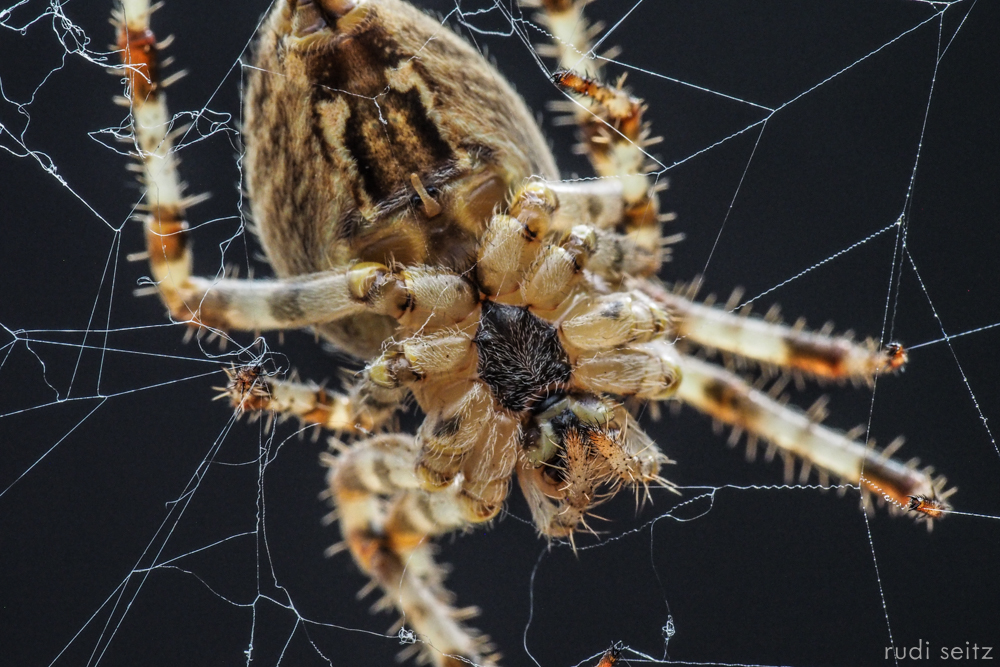 I should mention that while the spider looks big and dramatic in these photographs, it’s really a tiny little thing that you might consider to be visually unremarkable if you didn’t get in very close. This next image shows my basic technique for photographing the spider. The idea was to position the black board behind the web in such a way that the board itself would be in shadow while the web and spider would be illuminated by sun. I got lucky with several days of bright sun. The photos in this collection were all handheld shots taken with a macro lens at a distance of only a few inches — basically as close as I could get.

I’ll leave you with this closing portrait of our eight-legged friend: 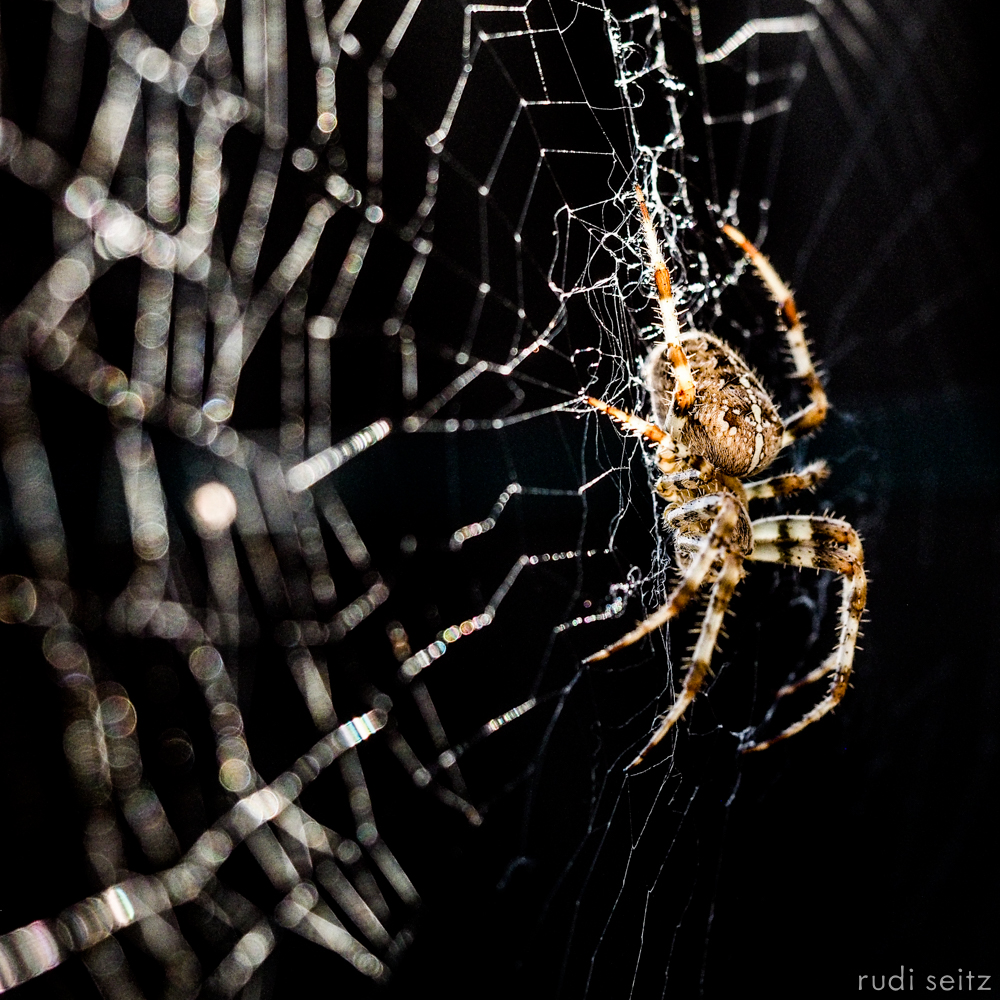 One thought on “My Spider”