When I began work on my album Canons I expected that its main audience would consist of three groups of experienced classical listeners:

At the same time, I hoped that I could turn some new listeners on to counterpoint, including those who don’t consider themselves classical music buffs and who might not know what a harpsichord is.

On the evening of April 3, 2017 I had my first success towards that latter goal. I returned home and found that my order of 600 copies of Canons — the physical CD — had been manufactured and had finally arrived at my doorstep.  My friend and neighbor Sal was passing by at the time, and he became my very first customer. While not a classical aficionado (he’s more into classic rock and contemporary singer-songwriters) he’s open-minded and adventurous as a listener. He bought a copy of Canons and added it to the collection of music he plays in his car. And so, much to my delight, my brand new CD took a spot beside The Doors. Here are some photos of the boxes, and Sal holding his new purchase. 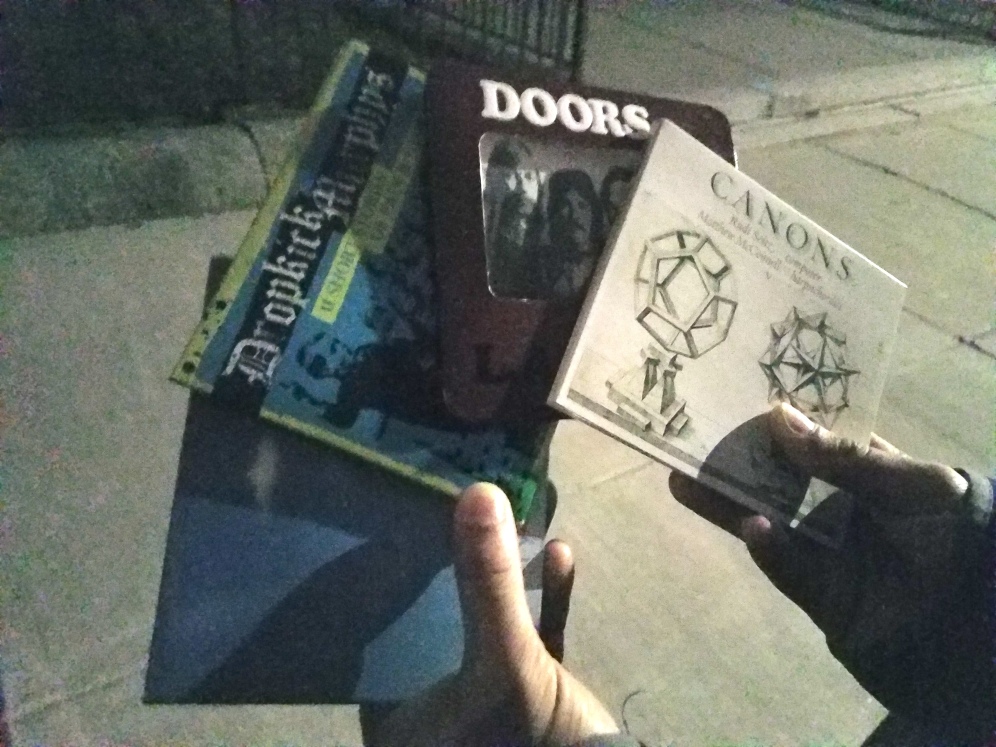 I’ve spent a lot of time thinking about how to explain canons to those who aren’t familiar with the concept. First, I want to assure newcomers that the following definition I found on the Internet is entirely wrong:

A canon is a type of musical composition in which multiple military cannons facing the audience are pre-tuned to a specific pitch and are fired off one at a time, each at a fixed interval after the previous cannon was discharged.

In truth, listening to a canon will do you no harm. It will very likely entertain you. At the very worst, it may leave you overwhelmed or mildly bewildered – not to worry.

A canon is a type of musical composition in which multiple copies of the same melody are played simultaneously, but with different starting times, so that there is a leader entering first, and one or more followers that imitate the leader.

Listening to a canon can stretch your powers of comprehension, but it’s not a test. You don’t have to perceive everything about a canon in any one listening. The goal is to see what you notice and how your awareness deepens as you keep listening.

I’d recommend finding a few canons you like and listening to them over and over. I wrote a whole album of forty-five canons but I usually don’t listen to the whole thing from start to finish. Often I’ll listen in groups of ten or so, and then if one piece stands out to me I’ll keep replaying it and listening in different ways.

A brief canon is almost like a seed for a musical experience that expands as you give it your attention, growing into many minutes or even hours of listening as you play the canon over and over, hearing different things each time.

In listening to canons performed on keyboard, it can help to have an image of the performer in your mind. He or she is sitting at a keyboard and playing with two hands. The performer’s left hand generally plays in the lower range of the keyboard and the right hand plays in the upper range.

You can enjoy a canon without knowing much more than this. But if you want to get deeper into the experience of a canon, you should familiarize yourself with strategies for understanding musical counterpoint. And you should be aware of some questions you can ask about a canon when you want to grok its structure on a deeper level. You may find that the answers to some of these questions are easy to discover through listening alone, while for others you’d really need to see a visualization of the canon or read the score. Don’t worry if you can’t answer these questions — simply being aware of them is a good way to deepen your listening: