Grouping scales into modal families might seem like a largely theoretical project.  After all, these families are motley crews, with members that have totally different musical personalities. Locrian and Ionian belong to the same family, yet one is eccentric and unstable while the other is the terra firma of Western music.  If they behave so differently, what can we learn from the fact that Locrian and Ionian have a “family connection”?

It would be convenient if all “interesting” scales belonged to a small collection of modal families, but this is simply not the case.  For example, the 72 ragas of the South Indian Melakarta system belong to a total of 36 modal families — still a large number to get to know.  (I’ll write more about the Melakarta system in a separate post).  However, if we place a certain “natural” restriction on the kinds of scales we consider, we end up with fewer scales belonging to dramatically fewer families.

In this post I’d like to consider seven-note scales that do not contain two semitones in a row.  The major scale satisfies this constraint: in C major, for example, the semitones B-C and E-F are not consecutive.  But if we flatten the second degree of C major, the resulting scale would violate our constraint because B-C and C-Db would form consecutive semitones.  It’s worth noting that there are many beautiful scales that violate the consecutive semitone constraint.  It seems that consecutive semitones work well when they are centered around the first or the fifth degree of the scale.  For example, there are many ragas in North and South Indian classical music that use natural 7 in conjunction with flat 2 (forming a cluster around the root as we just considered); or sharp 4 in conjunction with flat 6 (forming a cluster around the fifth).  The North Indian Rag Poorvi or Purvi has both of those clusters: its pattern is 1 b2 3 #4 5 b6 7.  Another famous scale with consecutive semitones is the Blues scale: 1 2 b3 4 b5 5 7.  (Here, the semitones are centered around b5 instead of 5.)  On the other hand, much Western music is built from scales that do obey the consecutive semitone constraint, and the theorist Dmitri Tymoczko has written extensively about this constraint as a point of connection between classical Impressionism and Jazz.

In this post I’d like to show that all scales meeting the consecutive semitone constraint belong to one of only six modal families.  (I’m assuming a twelve-tone equal-tempered octave and am only considering scales with matching ascending and descending forms.)  Writing in 1997, Tymoczko presented essentially the same conclusion, although his list of modal families is slightly different because he frames the constraint a bit differently.  (Instead of focusing on seven-note scales, he allows scales of any size but disallows intervals larger than a major second between any two consecutive notes; later, he allows augmented seconds but disallows scales that are subsets of any larger scale meeting the criteria.)  In any case, the claim is not hard to verify with a software analysis of all seven-note scale possibilities, and it’s easy to obtain from combinatorial methods of scale construction such as those discussed in From Polychords to Polya by Michael Keith.  What I hope to offer here is a simple, visually-oriented explanation.  This style of presentation might help build intuition into the dynamics of scale construction, and I also hope it might be enjoyable as a bit of equationless recreational math.

So how can we find all of the modal families that don’t have consecutive semitones?  To get started, let’s observe that if we’re building a seven-note scale, we need to pick five notes from the octave to leave out.  We can think of these five omitted notes as dividing the octave into five sections.  All of the notes we include in our scale will fall into one of those five sections, and to obey the consecutive semitone constraint, we can’t have any three notes in one section. 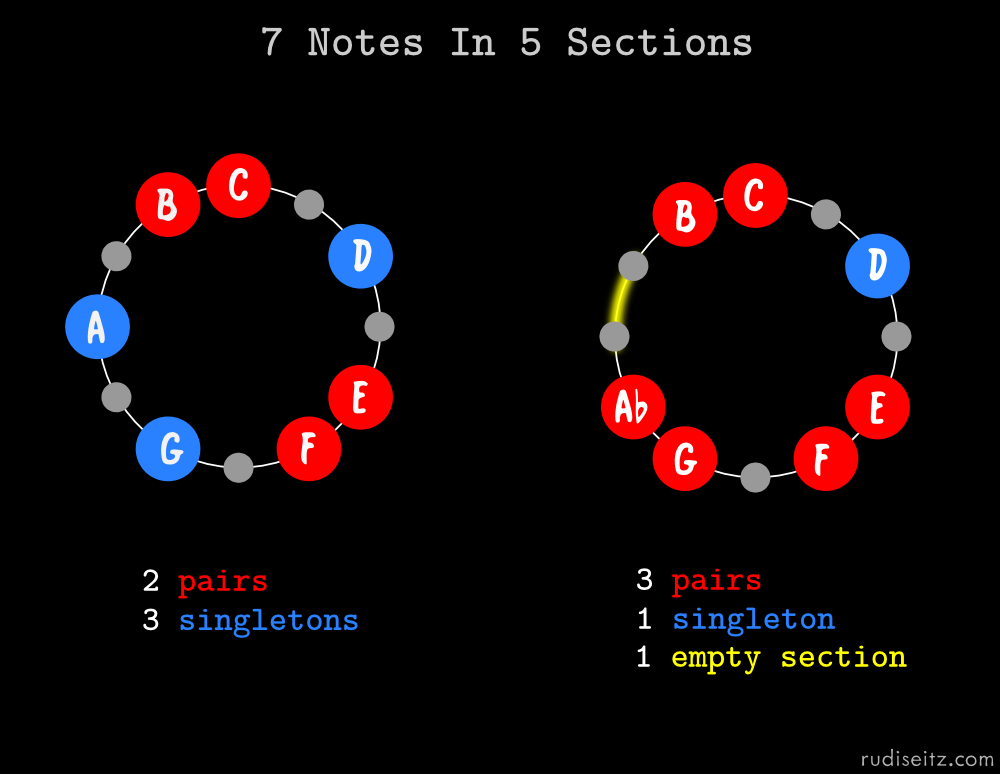 In a general sense, if we’re placing any seven “items” into five sections, and if we can’t put three in a section, then there are only two possibilities:

Translating this into musical terms, if we have a seven note scale without consecutive semitones, then it must have:

I’m using the term “singleton” to refer to a note that does not have any immediate neighbors in the scale that would form a semitone with it.  And I’m observing that an “empty section” in our terminology means that the two omitted notes forming the section would occur right next to each other in the scale, creating the interval of three semitones or an augmented second between the notes on either side of the gap (see Ab and B on the right side of the diagram above).

In each of these cases, we’re free to move the section contents around as we like (for example, deciding whether our empty section in case 2 falls between two full sections or next to a singleton).  Different arrangements of the section contents might yield different sequences of intervals representing different modal families. Our task is to figure out how many distinct arrangements are possible.  To explore this, we’ll represent the section types as beads on a necklace.  Instead of including one bead for each of the twelve notes of the octave, we’ll work with simpler necklaces that have only five beads.  We’ll use a red bead to represent a section containing two notes that form a semitone.  We’ll use a blue bead to represent a section containing a singleton note.  And we’ll use a yellow bead to represent an empty section that creates an augmented second between adjacent notes.  (It’s important to mention that this analogy between scales and necklaces only works if we keep the necklace on a flat surface and never flip it over; what we’re interested in is the clockwise order of the beads, and that order might change if we flip the necklace!)

Now that we’ve reduced the scale problem to a necklace problem, let’s ask how many necklaces we can make with two red beads and three blue beads (or two semitones and three singletons — our first case above).  We’ll consider two necklaces as distinct if we can’t rotate one to match the other while keeping them on a flat surface.  In fact there are only two possibilities: the red beads can be separated by blue or they can sit right next to each other.  (If they’re separated, there will be one blue bead between them on one side, and two blue beads on the other side; and if they’re together, all the blue beads will fall together as well.)

Before moving to case 2, let’s look at a variant of case 1.  What happens if we take away one of the red beads above and replace it with a yellow bead?  How many necklaces can we make with three blue beads, one red, and one yellow?  Well, now we have four possibilities: each of our original two-color necklaces gives us two new necklaces since we can choose one of two red beads to replace with yellow.  Each choice yields a necklace that’s distinct by our definition. 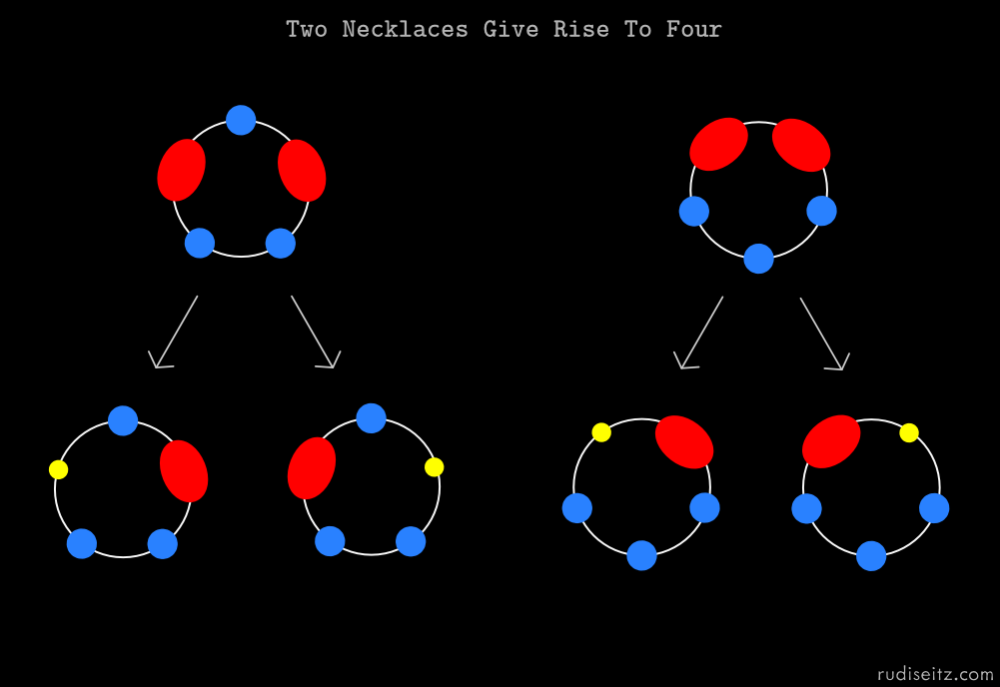 Of course, to address case 2 of our scale problem, we need to know how many necklaces we can create with three red beads, one blue, and one yellow (three semitones, one singleton, and one augmented second).  But this is basically the same question we just answered, since what matters in a mathematical sense is not the specific colors of the beads, but how many of each type of bead we have to work with.  To get our answer for three red beads, we can just take the 3-blue/1-red/1-yellow necklaces above and swap blue with red.  Here then, are all six necklaces satisfying our scale constraints, with the two-color possibilities on top, and the three-color possibilities below:

In fact, these necklaces represent the six modal families that include all possible seven-note scales without consecutive semitones.  If we unpack the meaning of these necklaces we can see what scales they actually generate.  In the diagram below, I’ve marked scale degrees in a clockwise order on each necklace, reflecting the most common choice of a root note in each case.  The scale degrees are natural, flat, or sharp according to the pattern of intervals dictated by the necklace.  Of course, if we position the root differently, we get a different interval sequence relative to the root — in other words, a different mode in the same underlying family — which would have a different pattern of natural, sharp, and flat degrees.  Each necklace gives us seven possible modes, corresponding to seven positions of the root, for a total of 42 possible modes that satisfy the consecutive semitone constraint.  (And since none of the necklaces is rotationally symmetric, we can gather that all of those 42 possibilities are distinct.)

In this set of six families, you’ll notice three items that are likely familiar.  There is the major scale, the melodic minor scale (which we take here to have the same descending form as the ascending form, as it is used in jazz), and the harmonic minor scale (which we also take in the version with matching ascending/descending patterns).  The so-called “harmonic major” scale is a fourth item that might be familiar as it comes up in jazz theory — it’s basically a major scale with a flat 6.

The two less familiar items in the lower right corner can be seen as subsets of the eight-note diminished scale.  Remember, the diminished scale is a sequence of half and whole steps.  If we take the mode of the diminished scale that starts with a half step, we could label the scale degrees as 1 b2 b3 3 #4 5 6 b7.  If we omit the b3 above our chosen root (leaving natural 3 in place), we get the raga known as Ramapriya in the South Indian Melakarta system (1 b2 3 #4 5 6 b7).  If we omit the natural 3 instead, we get the raga known as Shadvidamargini (1 b2 b3 #4 5 6 b7).  We can look at these ragas as two of the most musically workable or “coherent” seven-note subsets of the diminished scale, because they have a perfect fifth above the root and all the other degrees occur in easily recognizable varieties (there is no #2 which sounds like b3, no #5 which sounds like b6 etc.).  It’s interesting to note that Ramapriya has no modal relatives that satisfy the constraints of the Melakarta system; Shadvidamargini has one, called Nasikabhushani, but it contains a #2.

Next time you come across an unfamiliar seven-note scale, check to see whether it has consecutive semitones.  If it doesn’t, I’ll be happy to wager you anything that it’s a mode of major, melodic minor, harmonic minor, harmonic major, Ramapriya, or Shadvidamargini.  And if you’re looking for some interesting scales to explore, start with the members of these six families.

Appendix I: How does it sound?

One of the interesting things that happened for me in working through this analysis was “discovering” Ramapriya and Shadvidamargini.  Of course, they’re both present in the full list of Melakarta ragas, and they probably turn up under different names elsewhere, but it was interesting to encounter them by exploring a limited space of possibilities, suddenly finding my attention focused on two uncommon gems.  Here’s a sample of my own first exploration of Shadvidamargini.  (I’m playing in my personal improvisational style and am not attempting to treat this in Carnatic style. And throughout the post, although I’ve been using the Melakarta name for “Shadvidamargini,” I’m really referring to the scale as an abstract construct outside the context of any specific musical tradition.)  On a technical level, this improvisation travels through a series of modulations around a fully diminished seventh chord.