This post is a follow-up to my article about Note Neighborhoods, a technique I developed for navigating the guitar fretboard.  In this post I’d like to provide charts that can be used for practicing this approach — these are the charts I use myself.

First, a recap of the Note Neighborhood concept.  In guitar playing it’s common to practice ascending and descending scale patterns that start from the root of a scale or mode and stretch across all six strings (for example, see my post on Guitar Modes Unified).  In the Note Neighborhood approach, you dispense with the idea of ascent and descent from a starting point, and you focus on smaller patterns that extend outward from a central note.  You practice one pattern for each scale degree, taking that scale degree as the center and learning to find all of the other notes that surround it physically on the fretboard (within a three-string/three-note-per string circumference).   If you’re playing in major, melodic minor, harmonic minor, or any of the their modes, each scale degree will have a unique neighborhood pattern, a unique “geography” including eight notes around the center.  Once you’ve memorized all seven neighborhoods, you can play freely in your chosen scale anywhere on the fretboard, as long as you recognize what degree you’re playing at a given time and can recall its neighborhood pattern.  This approach works particularly well in All Fourths tuning because you don’t need to memorize variants of each neighborhood pattern for different string sets; however, it can be applied to Standard Tuning as well.  I find it particularly useful when working in Melodic Minor and its modes, since the six-string patterns for Melodic Minor lack the regularity of the Major patterns and (for me at least) are harder to internalize.  This approach also frees you from always searching for the root as the anchor of your fingering because you learn to be equally comfortable taking any scale degree as your “anchor” — that’s helpful if you’re improvising music that’s not “root-centric” but moves back between different points of modal focus within an available pool of notes.

I don’t see the Neighborhood concept as competing with other approaches for understanding the fretboard; it can be used to complement them.  In fact, if you know the three-note-per-string fingering patterns for the major and melodic minor modes, you’ll see that the Neighborhoods are just fragments of those patterns, labelled in a different way (focusing on the center as opposed to the lowest note).  If you’re an experienced player, you might think of the Neighborhood concept as a different way of organizing fretboard knowledge that you already have, so you can apply it differently and see new possibilities.  Or if you’re just starting out with scale patterns, you might find that Neighborhoods cut down on the amount of rote memorization you have to do the first time around.

Here are the seven neighborhood patterns for Major.  (If you’re playing in standard tuning, these will work on the bottom four strings as shown, but you’ll have to shift things up by a half-step when you cross from the G string to the B string.)

And here are the neighborhood patterns for Jazz Melodic Minor: 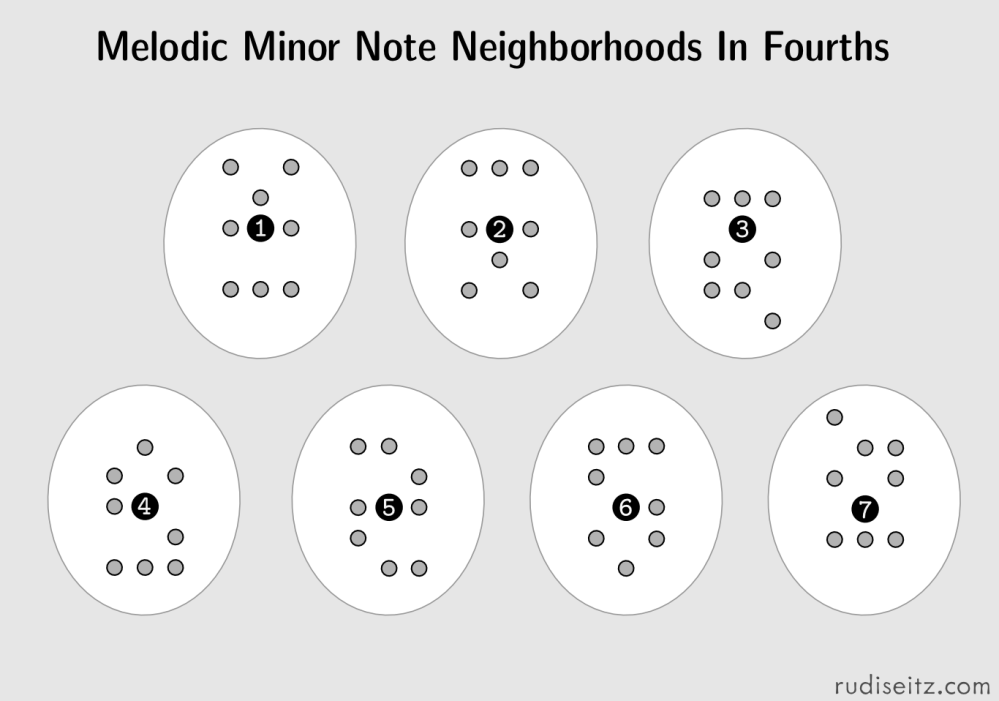 Addendum I: Comparing The Neighborhoods

One way to get to know the neighborhoods is to compare them–to notice what they have in common and how they differ.  A great way to do this for the Major neighborhoods is to lay them out side-by-side in Circle of Fifths order: 4, 1, 2, 5, 6, 3, 7.  When you do this you’ll notice that each neighborhood differs from the previous one by only one relationship, as shown in the diagram below.  For example, look at the 5 and 2 neighborhoods: 5 has a major third above it, while 2 has a minor third above it.  This means the finger position in the top right region of those two neighborhoods is different; otherwise, the fingering patterns are identical.  Now compare the 2 and 6 neighborhoods, and you’ll spot only one difference, this time in the bottom left corner.  Note that between the 4 and 1 neighborhoods, and also between the 3 and 7 neighborhoods, you’ll spot two finger positions that are different.  That’s because each neighborhood contains some doubled notes, and when you go from the 4 to the 1 neighborhood, or the 3 to the 7 neighborhood, it’s one of these doubled relationships that changes.  Take a closer look and you’ll see that the two positions that shift are an octave apart.  (As always, click on the image for the full size version.)

Addendum 2: Theory Behind The Comparison

The note neighborhoods in the diagram are just different ways of expressing the information in these modal formulas.  A modal formula looks at the notes in an ascending sequence from the root, whereas a neighborhood pattern considers how the notes are situated around the given center, but the underlying relationships are the same.  It’s a remarkable property of the major scale that the modes can be arranged in such a clean progression, where one modal formula differs from the next by only one sharp or flat.  That’s to say, it’s remarkable that when you look at the interval relationships that one note forms with other notes in the major scale, and then you do the same analysis for its fifth, there’s only one difference.  I call this “remarkable” because it’s not true for many other scales, namely melodic minor.  You can’t arrange the modes of melodic minor so that successive formulas differ by one accidental, and you can’t arrange the neighborhood patterns in a clean progression like what’s shown in the diagram above for Major.  For example, try comparing 1 and 5 in melodic minor and you’ll see two relationships that are different: 1 has a minor third and a major sixth above it, while 5 has a major third and a minor sixth above it!  You can try other comparisons too–1 with 4, 1 with 7, etc.–and in each case you’ll find at least two differences in the neighborhoods.

One thought on “Note Neighborhoods II”